← Marcus The Trumpet Man
How This Blog Came About → 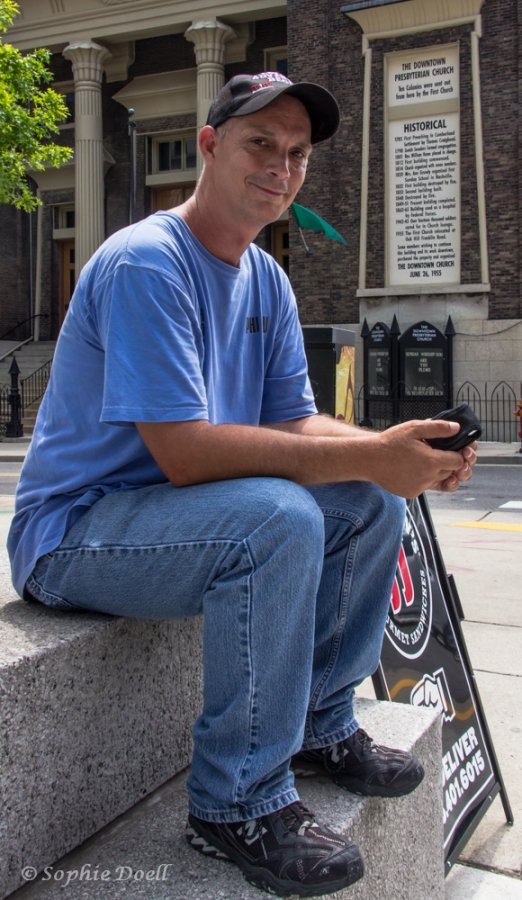 Looking back, Jack Fisher thanks God that he got arrested when he tried to sell some drugs to an undercover cop about 3 years ago, because it’s the wake-up call he needed to start turning his life around.  He’s been clean since, and has learned healthier ways to cope so that he no longer has a desire to use drugs.  He was sentenced to 28 months in jail and just finished serving his time 4 months ago.  He has been walking the streets of Nashville, looking for a job everyday.  He was living at the halfway house, but got kicked out when he could no longer pay the $125/week to stay there.  He said it’s been hard because people are repulsed by his arrest record, or the businesses are simply not hiring any new workers.   Another reason he’s having difficulty getting a job is also his lack of a high school diploma.  He wants to get a GED, but lacks the $600 it costs to go through the program and take the test.

He has an estranged 20-year-old son, with whom he’s trying to reconcile.  But like all of his friends and family, his son has lost faith in him.  He said he understands that, because he has lied to them, but he hopes that in time, he can earn their trust back.  He’s been getting food at the Presbyterian church that you can see behind him in the photo.  At night, if the weather is good, he would sleep on the lawn of another church down the street that allows the homeless to sleep on their property.  (The city has been arresting people for sleeping in public places.)  When the weather is bad, he would go to sleep at the shelter for the homeless, but he said he prefers not to go there, because he wants to stay clean, and doesn’t like that there are people still using drugs there.  When I asked if he needs anything, he said he’s thankful for the help that the church and other folks have given him, so there’s no lack there.  He only wishes for a chance to prove himself as a good worker, to earn his own money and get his own place to live.

This site uses Akismet to reduce spam. Learn how your comment data is processed.