Winter Without a Home

To have no home in the Winter in Indiana is brutal, especially with the north wind blowing. I’m writing this in my house, sipping hot coffee, wearing warm clothes, staying warm as I look out the window at the snow covered grounds. I can’t help but think of my homeless friends in Indianapolis who are living in tents outside in this snow.

I’m thankful that this past Tuesday night, my friend Paul Sitkberg and I had an opportunity to go to downtown Indianapolis to distribute some socks, hand warmers, and emergency blankets, along with flashlights and lanterns, to our homeless friends. It warmed our hearts to come back with empty boxes. We hope and pray those items are helping them to stay warm in the snow today.

The harshness of living outdoors in the Winter experienced by the homeless is a serious matter of life and death. This past week, a friend of ours, Jeffery Leatherbury, a sweet man who loved everyone, passed away after being taken to the hospital by a visitor to the camp who saw that he was ill. Alas, it was too late to save him. I will really miss his constant teasing that brought me much laughter every time I saw him. Another friend, Tony, was hospitalized for 10 days for pneumonia. I’m glad he recovered to visit with us this past Tuesday! The homeless people are especially vulnerable to sickness as they constantly live in the damp and cold environment. They need help to stay warm and dry. As you enjoy the warmth of your home and hot coffee, tea, or cocoa, please say a prayer for our homeless friends.

Thank you for all your support for our endeavor to help the homeless!

He Was A Good Man And A Friend

At the time of this writing, it’s been 3 weeks since he’s been gone, yet no news media has mentioned the tragic collision that ended his life.  Some bystanders at the accident who did not know him surmised from his appearance that he was homeless, and some even presumed that he was drunk or under the influence of drugs, or that he did not look carefully before stepping off the curb into the street.  None of this is true, except for his lack of a permanent dwelling place.

His name was Grady Steven Scott, and while he was without a home, he was not an irresponsible drunkard, or a drug addict.  He was a son, a brother, an uncle, a bighearted man, and a good friend to anyone who would take the time to know him.  In the years that I have been visiting homeless people near the intersection of Shadeland and 21st Street in Indianapolis, he has been polite, always greeting me with a big smile, asking me how I was doing, and was genuinely concerned for my well being and safety in that area.  He showed deep gratitude for the things my friends and I do for the homeless.  He took very little from us, often saying, “Thank you, but I’ve got all I need; better give it to someone else who needs it more than me.”  He was the kind of man who would gladly give the shirt off his back to another that he deemed needed it more. Even in death, he donated his liver to save someone’s life.

While he struggled with mental illness (bipolar disorder), he always gave his best at any temporary work he could find.  On July 29th, 2019, the day that he was hit by a speeding vehicle, he was as sober as anyone could be.  He spent many hours fixing an ice machine at the Exxon gas station convenience store.  He impressed the manager so much that he was offered a part-time job.  He then said to Jill, another employee there, “Today’s my lucky day!” His hard work to find stable employment and get out of homelessness finally came to fruition.  He bid Jill good-bye and was crossing the street to run an errand, intending to return to the store later that evening to help Jill with the closing of the store.  But he never returned because, after carefully looking for oncoming cars (as he habitually did), when he stepped off the curb, according to eyewitness account, a speeding car “came out of nowhere” and hit him so hard that he “flew” to hit another car.  In that one instant, by the action of a careless driver, Grady’s life ended, just when he was about to taste the fruit of his discipline and get out of homelessness.

To the media, he wasn’t newsworthy, but to me, he was a good man and a friend I will miss very much.

They Are Human Beings, Not Trash.

I finally visited my homeless friends in Indianapolis again last night, after a couple of months of dealing with my health issues. I was dismayed to find that the city officials have yet again ordered a homeless camp to be dispersed without giving them an alternative place to move to. Thankfully, for our friend Tony, his shelter is farther down the hill toward the river and cannot be seen from the road, so he was given permission to stay, and the officials were kind enough to help him relocate his garden from the street level down the hill closer to his shelter. But many who were camping on level with the road were told to move, with no alternative location to move to, and their belongings will be swept away in dumpsters. This has been the pattern whenever enough complaints have been lodged to pressure the city officials to “clean up” the city. Then the homeless people are treated no better than the trash along the road that needs to be swept up and taken out of sight.

Homeless people are human beings, and it’s not right to treat them like trash. They have needs for shelter and basic sustenance, just like you and me. It’s a really sad commentary on our society when we treat animals better than we do fellow human beings. The right thing, the humane thing, if you do not want them to be camping along the road, would be to offer them an alternative place with adequate resources for them to move to and form a self-sustaining community. With all the wealth apparent in the expensive, gated subdivisions being built everywhere, can we not give these folks a permanent “subdivision” of their own where they can rest and call home, instead of sweeping them here and there like trash? 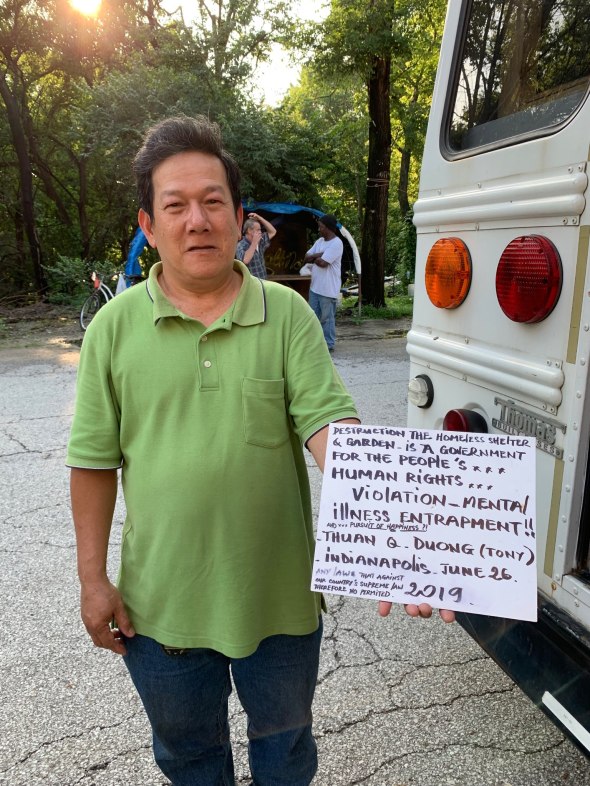 Thuan Q. Duong (Tony), who has been living in a shelter along the White River, holding a sign protesting the inhumane treatment of the homeless by the city officials. Photo credit goes to our friend Lisa Daniel.

While my family was attending GenCon in downtown Indy in early August of 2016, I lagged behind taking pictures when we were on our way to lunch and got lost.  That’s when I met Tanya.  She was offering to give directions to people for some change.  The problem was I had no idea where to go.  So I ended up talking to her, thinking I’ll just call my family with my cell phone and catch up with them later.

Tanya came from Kentucky, having left an abusive relationship behind.  She’s been sleeping on the couch of a friend, hoping to get a job and a place of her own.  Her new start in Indy didn’t go well, however, when her bag got stolen with her ID in it.  Without ID, she could not find a job.  Without money, she could not replace her ID.  And so began her life of homelessness.  She also suffers from depression and has not had the medication since she became homeless.  Being homeless, of course, only aggravates the depression, as anyone can imagine.

While I was talking to Tanya, “Romeo” came up to greet Tanya.  His real name is Joshua.  Joshua and Tanya became friends after meeting each other on the street and have been looking out for each other.  You can find them at the southwest corner of Maryland and Illinois.  If you’d like to help, they would appreciate a hand-up via a job where they can earn a living.  Oh yeah, Tanya would need to get her ID replaced first. 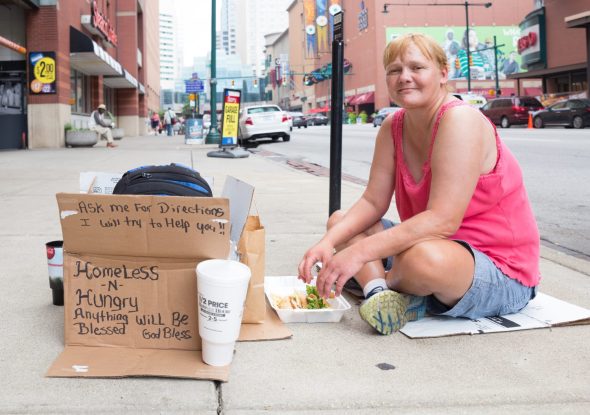 Another Way You Can Help

As those who’ve been following me on this project know, I’ve been collecting items from friends and taking them to the homeless folks.  Often times, though, the items they need have not been donated, and I ended up purchasing the items myself.  This cost has been rising, and in addition to the cost of gasoline to travel to collect the items and take them to the homeless, it has grown beyond what I myself can handle.  So I have set up a Go Fund Me page as another way for people to help me with this project.  If you have been touched by what I’m doing and have the means to help me defray my cost, I would really appreciate it!

To contribute to this project or help me spread the word to get more funding, please go to https://www.gofundme.com/facesofthehomeless

Thank you very much for your love and generosity!

I’m very glad to join effort with local photographers, James Eickman, Rhonda Clark, and Mike Richart, to bring to the public the reality of homelessness.  The photo exhibit contains images of homeless camps and individuals in Indianapolis, along with their stories.

In conjunction with the photo exhibit, the library is hosting a special program on May 17th, 6 – 9:30 PM, with a showing of the film Time Out of Mind, starring Richard Gere and Ben Vereen, followed by a presentation and discussion (see photo below for details of this special program).  The photographers will be there for a Meet and Greet from 5 – 6 PM before the program, and again at the reception following the program.

Thank you for going to see the exhibit and giving us your feedback! 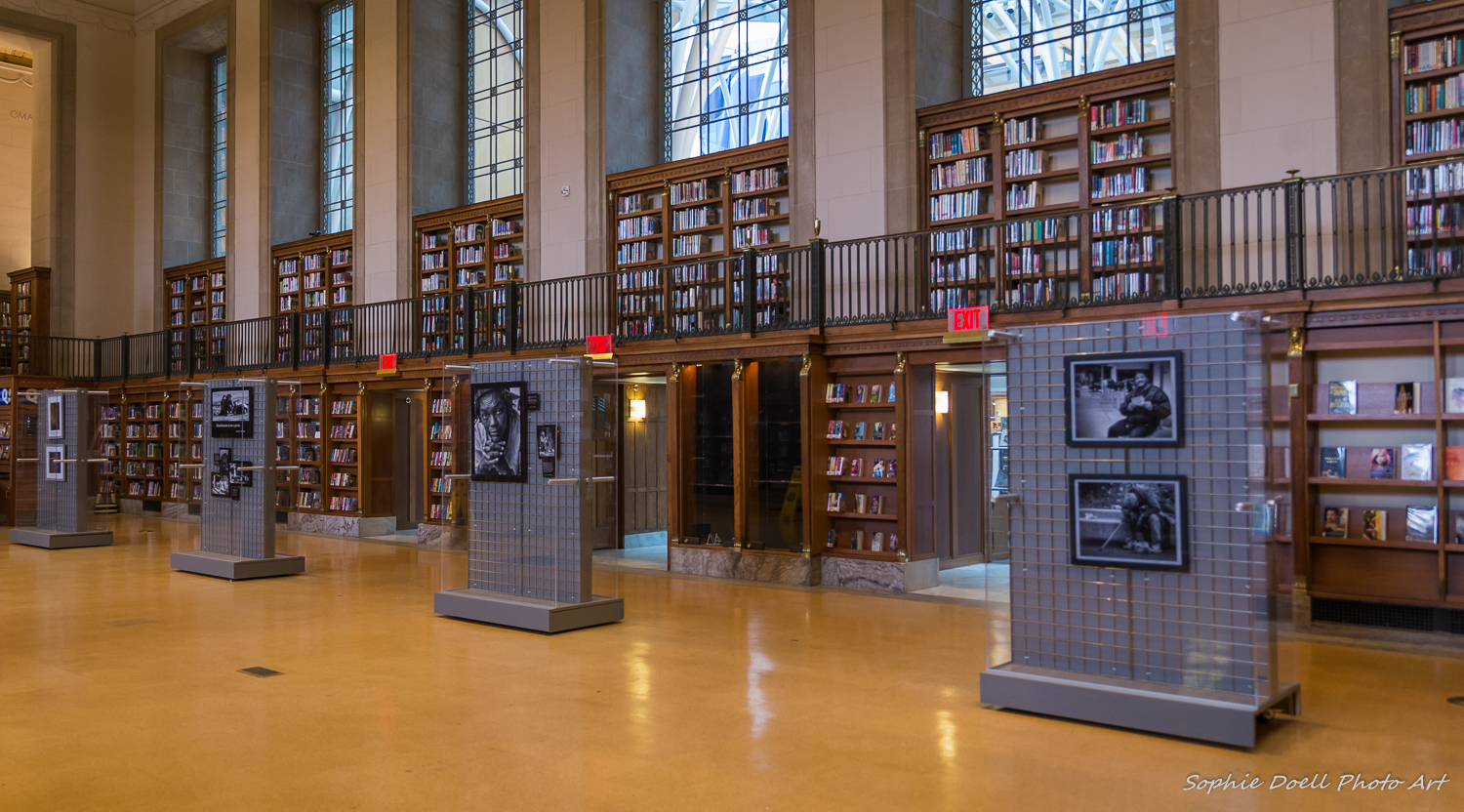 A Young Woman I Never Met 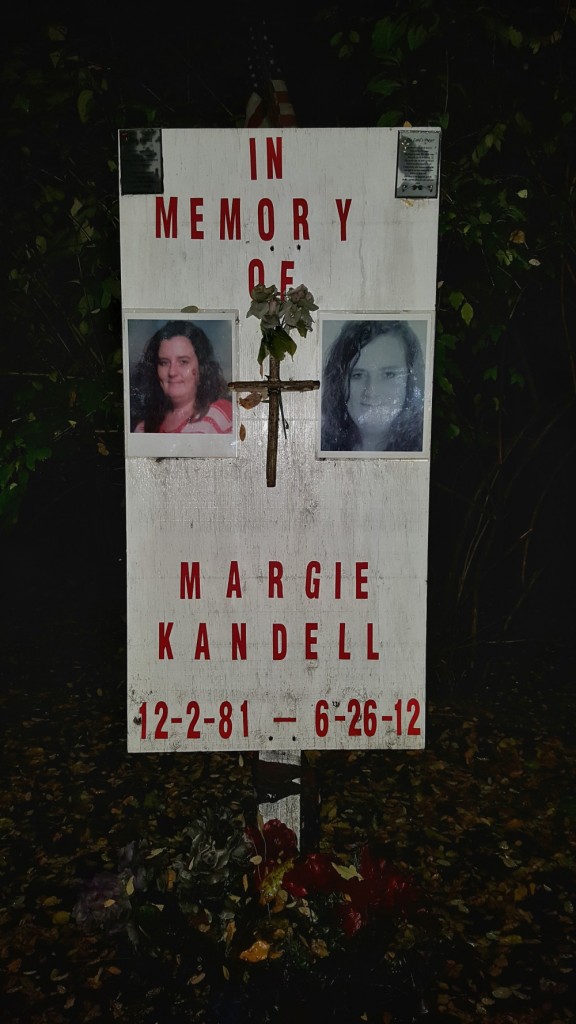 This is a memorial for a sweet young woman that I never had a chance to meet. The memorial was created by her friends at a homeless camp in Indianapolis called “The Jungle”. Margie Kandell was originally from Michigan, and she had lived in The Jungle for about a year when she got engaged to a man named Jim and moved into his apartment to prepare for their future together. But what should have been a happy ending turned into a tragedy. Margie had all her teeth pulled in preparation for some dentures and was in recovery when Jim came home to find her unresponsive. I wasn’t able to find out for sure what her cause of death was, but her friends speculated it was excessive bleeding from the oral surgery. Margie was only 30 years old when she died.

Another Successful Implementation of Small Homes for the Homeless

My heart is filled with joy each time I see a community effort like this to help the homeless.  If you hear of a project like this in the city you’re in, please support it!  Together, we can alleviate the suffering and bring hope to those who are less fortunate.  Read more about this success story here.

Do you have building skills?  You can make a huge difference building tiny houses for the homeless!  Watch how one man in California has done this for a 60-year-old homeless woman he’s befriended.

. . . And when the whole community comes together with compassion, it makes a big difference to the homeless.  Watch this video and be inspired.  Think of what you can do to help the homeless, and then go do it!  Start doing it, and ask the community to join you!